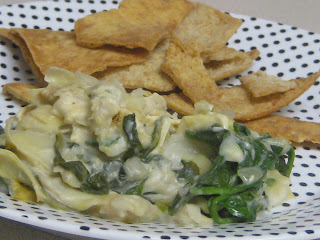 So, this is my first official blog post and guess what? It's a yummy recipe! Those of you who know me well will not be shocked. I am constantly looking for new, tasty and healthy vegan recipes to try and then share with my friends.
I made this for the 4th of July weekend festivities and it was a big hit! The use of the white beans instead of vegan cream cheese gives this an extra super healthy boost, which I just loved.
I will be making this again next weekend at a barbeque at my parents' house in the suburbs of Chicago (read: NOT vegan-friendlyville) and I'll bet you no one will even be able to tell it's vegan! So funny that I even have to "sneak" vegan things onto the menu, but god forbid I say that it's vegan...nobody will eat it and I'll be stuck eating all of it! I guess I could live with that! ;) 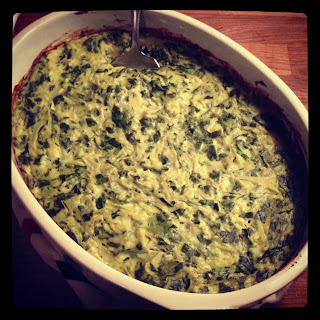 Yeah, I've made vegan spinach and artichoke dip before and it was good. Really good, actually. But this recipe (that I tweaked ever so slightly...it didn't need much help) is hands-down the best vegan version of spinach and artichoke dip I have ever had. And there's no crap in it!! When I say crap, I'm referring to processed vegan cream cheese and processed vegan cheese shreds. The recipes I have tried and enjoyed in the past all contained those things...which isn't a terrible thing, but this recipe didn't use any of that and came out way better! Those who were at our NYE party this year will confirm the awesomeness of this dip!

I poached the recipe from Dreena Burton's Plant-Powered Kitchen which focuses on whole food vegan recipes. One of my resolutions this year is to cut back drastically on the processed stuff. Don't get me wrong, I love it, but I know myself well enough to know that it's dangerous for me to have around (read: I will eat too mu… 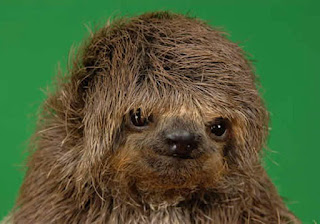 After looking at this hilarious and adorable collection of animals that are disappointed in you, I realized I've been slacking a tad with my posts. Thanks, sloth! Anyway, a really easy, healthy and tasty vegan BLT wrap is coming your way. Like, tonight! In the meantime, let these furry creatures express their disappointment with you too! http://www.buzzfeed.com/expresident/animals-who-are-extremely-disappointed-in-you